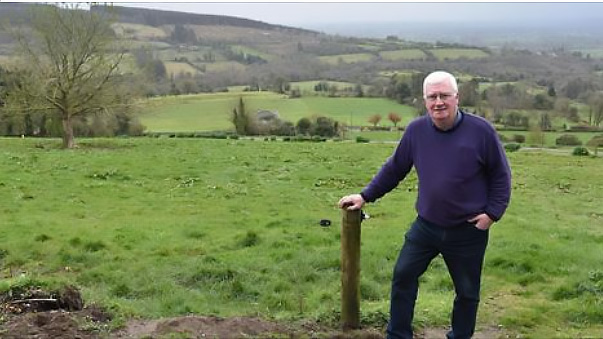 It was “love at first sight” for James Ryan on his introduction to the French Aubrac breed when he first spotted them with an Irish breeder.

And it is the dairymen with the larger herds who have now become the fastest growing market for the progeny of the breed from his herd and the breed overall in this country.

James farms 24 ha at Glengar on the Limerick-Tipperary border between Doon and Hollyford, which rises to an altitude of more than 1,100 feet over sea level with some spectacular views of the surrounding countryside.

The farm was being stocked with a mix of continental beef breeds of different colours and characteristics until the Aubrac’s came along.

“That was about twelve years ago and I was immediately taken by the Aubrac when I first saw them.  Their docility and hardiness impressed me a lot” he said.

“I made some enquiries about them and everyone I talked to were describing their ease of calving and low maintenance as important traits of the breed and they all seemed to be very pleased with their performance” he added.

That was around 2010 and less than a decade and a half after the first Irish bred Aubrac calf was born on the 200 ac farm of Mireille and Kim McCall in Co Kildare, the first Irish importers of the breed from the mountain regions of France.

To-day, the breed has become one of the fastest growing of the continental imports and fast becoming a dominant choice among dairy farmers for crossing,  with very strong demand for the bulls available from almost 200 pedigree registered herds in the country.

The breeders are finding that demand for the Aubrac cross calves from the dairy herds are meeting with strong demand from beef producers at the marts because of their potential as mainly good R grade and some U grade animals.

Carcass weights at 400-460kg at 16-20 months are being readily achieved by the males in beef production.

Aubrac sired calves registered to dairy dams has increased by more than 400pc over the past four years with the annual growth continuing to accelerate annually.

“I started by buying six heifers and the more I saw of them the better I was liking them and every year after that I continued to build up the herd and I am now carrying 32 breeding cows and their followers” said James Ryan.

“It was grand to go in the morning and find a calf outside beside the mother and no problem whatsoever. They are very hardy as can be up straight away within a few minutes” he added.

Working full time off-farm, the benefit of not having to worry about the cows calving was very important and in 2022, Aubrac are the only breed on the farm.

Scores of breeders, many of them leading dairy farmers, turned up for an Open Evening on the farm, hosted by the Irish Aubrac Cattle Society, courtesy of James, which was a barometer of the growing interest in the breed.

The herd is all Autumn calving and offspring not required for herd replacement or expansion usually sold at between one and two years.

“Dairy farmers are my customers for almost all of the bulls now.  They are changing to Aubrac for crossing, because of the easy calving and the performance of the breed.  That market is continuing to grow” said James.

The Aubrac originates from the Auvergne in Southern France, specifically a small town called Aubrac from which the breed has taken its name. The first cattle registered in the genealogic records of the breed go back to around 1894.

The longevity of the cows has become one of the noted characteristics of the breed which can remain productive up to around sixteen years of age bearing a calf every year. They are also noted to produce an excellent quality of milk for their calves and have really good maternal instincts.

Although James Ryan is farming at a high altitude, the south facing land is quite productive and he is capable of having the cows out on pasture by late March normally.

Nevertheless, he  believes that the characteristics of the breed originating in the rougher terrains in France has an advantage coming on to any of the more mountain type land in this country.

“Because of the hardy nature of the breed, they are better able to perform well on the rougher type of land in the higher regions in this country and it is an added benefit for to achieve excellent performance on the better type land” he says.

After a bit more than a decade converting to an all Aubrac herd and building up his breeding herd to 32 cows, he is convinced of his instinct in opting to switch and has no intention of reverting to any of the mix of breeds formerly kept on the farm.

“I am very, very happy with them” he says.

French Aubrac Expert, Ms Philip, who was on a 36 hour visit to see the development of the breed in Ireland told the gathering that he was “very impressed” and his take home message to French breeders would be on the scale of commercialisation of the breed in this country.

He said that breeders in France are looking for thick, deep type of animals, not too red and not too black, while Irish breeders are going for taller animals and they are also targeting the dairy market more for the bulls which is proving very successful for them.

Presentations were also made by Conor Lally, Agri Lloyd on nutrition and Noel Walsh, Animal Pharmacy on animal remedies and treatments.

Breeders were advised to start the halter breaking process as young as possible, always leading the animal from the left hand side, and always tieing the animal to a wall on the first day, while never tieing for longer than an hour for the first five sessions.

“While the animal is tied, so that the animal will get used to strange noises and won’t be spooked on sale day they were advised with a safety tip to “keep a short lead and never wrap the rope around your hand”.

There was also advice on the pre sale feeding and grooming recommended practices.

The expansion of the dairy herd and the requirement for easy calving in the larger dairy units, while producing a quality calf,  offers challenge and opportunity for the Aubrac’s, breeders have been told.

Speaking to farmers at the Open Day showcasing James Ryan’s Aubrac Herd, ICBF export, Eoin Frawley said “The dairy farmers want easy calving but they are also looking to add value to the calf to get a better sale price”.

His advice was to target increased weight at birth, while holding or reducing gestation length, and getting more of the breed available through the AI service.

“The progress of the Aubrac over the past five years is a really positive picture from the breed point of view on the useage nationally” he said.

“It just goes to show that the characteristics of the Aubrac breed is being appreciated by both beef and dairy farmers.

The Aubrac breed is relatively easy calving with good confirmation so it has been a very positive picture over the last five years” he said.

The reckoned the key question is how can the use of Aubrac sires be further increased.

“The best way to do that is aim at the opportunity in the dairy herd to get more bulls in there.  A lot of dairy farmers and in particular with the bigger dairy farmers there is an increase in the use of AI in those herds and they are becoming less reliant on stock bulls so the real challenge is to get more Aubrad bulls into AI” he said.

In particularly he advised the society to target getting more bulls into the Gene Ireland programme if possible because if they are in the Gene Ireland programme progeny will go forward to the Tully Progeny Test Centre to be tested on traits for use at commercial farm level like feed intake and feed efficiency, and also the level of methane being produced per kg of carcass.

“Those are really important traits and if more Aubrac bulls are got into the Gene Ireland programme the information can be relayed back to the industry and that will feed back to the farmers on the ground. They will then be able to choose the bulls from the better breeding lines and that will further enhance the genetic gain of the breed going forward to the future” he said.

“There are loads of bulls out there with higher birth weight and the higher the better to maximise the quality of the calf from the dairy cows” he pointed out.

He urged that the average gestation for the breed of 286 days should be maintained or improved and advised genotyping of all animals from an early stage to avoid any issues arising.

“You can then have a clear mind against any come back and if the figures come back that are favourable you may be able to decide to move on depending on performance figures to progress the breed” he said.